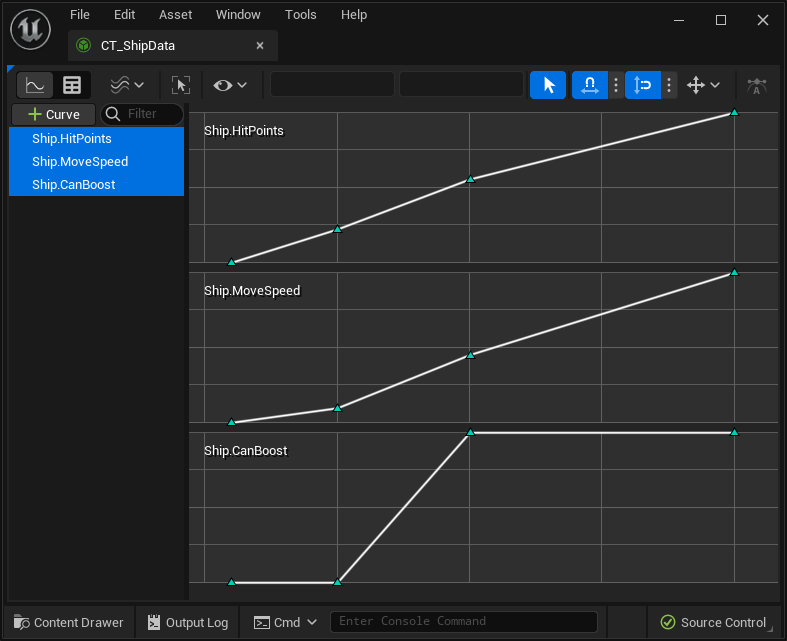 Curve Tables are another one of Unreal Engine's hidden gems. They are an excellent tool that can help bridge the gap between designer-created data and programmer-driven gameplay. It is heavily used by the gameplay abilities system.

At first glance they might seem the same as Data Tables but they serve a different purpose:

How to use a data table

Curve Tables can be defined in CSV or JSON. For this example we will use CSV but see the end of the page for how to define the same information in JSON.

An explanation of what's going on here:

Dragging the CSV file onto Unreal should show a pop-up window. Under "Import As" choose "CurveTable" and then choose your desired curve interpolation type.

This is important as the interpolation type is global for the table and cannot be changed.

After importing, you should see your data in the table view. Across the top are the X values you defined in your columns.

To see your data in graph form, click the button in the top-left. You can edit the values of your curve in the table view or by dragging data points up and down in the curve view, but you will not be able to add new data points. See the FAQ for more on the limitations of CSV-imported curve tables

The curve view also allows multiple curves to be displayed in a few ways: overlaid on top of each other with and without scaling or as a stack of curves.

Now that we have a Curve Table asset created and populated with data, how can we use that data in-game?

One way is to create member variables in our classes that we can use to refer to rows in our Curve Table asset. In the example below we add some FScalableFloat properties and expose them through UPROPERTY.

Exposing a FScalableFloats property using UPROPERTY displays them as shown in the diagram below.

Getting values from a FScalableFloat is pretty straightforward, there are even helper methods for interpreting the float values as integer or boolean.