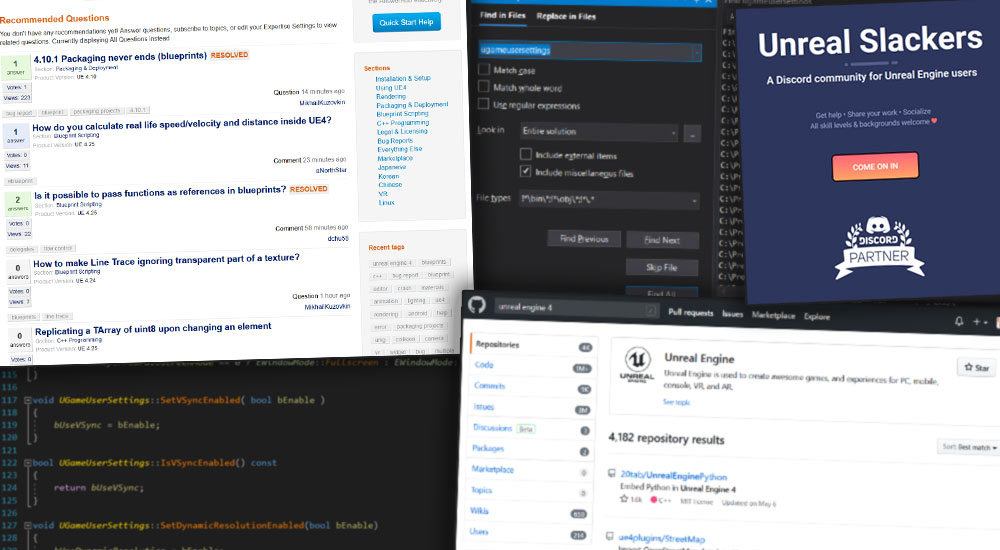 So, you're stuck? Me too, it happens a lot more than I'd like to admit.

Other than searching the web in general, luckily there are a bunch of places to get help for Unreal Engine.

If you're not sure how to do something, whether a function exists for it, or how to use a function you've found, I often find the quickest way is to search the engine source code. This is my first port of call, and I find it easiest as I'm usually in Visual Studio anyway.

In Visual Studio, press Control + Shift + F to do a plain-text search, make sure "Entire Solution" is selected so it seaches both your project and the Unreal Engine project.

The Unreal Slackers Discord server is an incredibly helpful and friendly place. If you have C++ or UMG questions in particular, you will probably get a reply.

Of course it's only people helping out each other in their free time, so don't be too demanding :)

The Lyra Starter Game (aka Lyra Sample Game) is a project made by Epic games for the release of 5.0. It showcases the "correct" way to make a bunch of things in Unreal Engine. It's a little complicated for complete beginners but if you're wondering about the best way to do something, looking how Lyra does it is a very good starting point.

In the Epic Games Launcher, under Unreal Engine there is a Learn tab that has a fantastic selection of example projects and demos to learn from.

If you are new to Unreal Engine, I recommend starting with Content Examples. For a more complete example to learn from, scroll down further and try the Action RPG game sample.

The Unreal Engine AnswerHub is a Stack Overflow-style question and answer forum that anyone can use.

I haven't used the Unreal Engine Forums for asking questions very often, but they are a great repository of knowledge.

Searching "Unreal Engine" on GitHub might not be a great way to answer questions, but I've found it really useful for finding interesting code snippets, new ways of doing things, plugins and more.

Definitely worth checking out every month or so to see what pops up.

Similarly, the Unreal Marketplace has a huge number of free code plugins that can be interesting to learn from.

UDN is available to developers that apply through Epic's developer program. It is a closed developer-only question and answer forum, similar to Answers, but 99% of the time your questions will get an answer from an Epic staff member within a week.

It costs money to be registered and access but I've found it really useful asking about odd bugs or asking if there are better ways to solve certain problems. If you're a medium to large studio I would definitely recommend it.

There's a reason the official documentation is this far down the list. It can be useful to get a high-level overview of a system but if you're writing C++ pretty soon it's better to start looking at the engine source or examples of usage.

The old Unreal Engine Community Wiki was a huge repository of knowledge created and maintained by hundreds of developers. Unfortunately it was removed and all the links to its pages are broken and now point to this forum post.

The new Unreal Community Wiki is a still pretty bare-bones, but some of the old content is still available through the Legacy tag.

Of course I couldn't leave my own discord off this list. If you are looking for help with more advanced UI issues, come chat with us on discord.benui.ca

I've found Twitter a great place to learn little bits and pieces for Unreal. Here are some people who post interesting stuff!