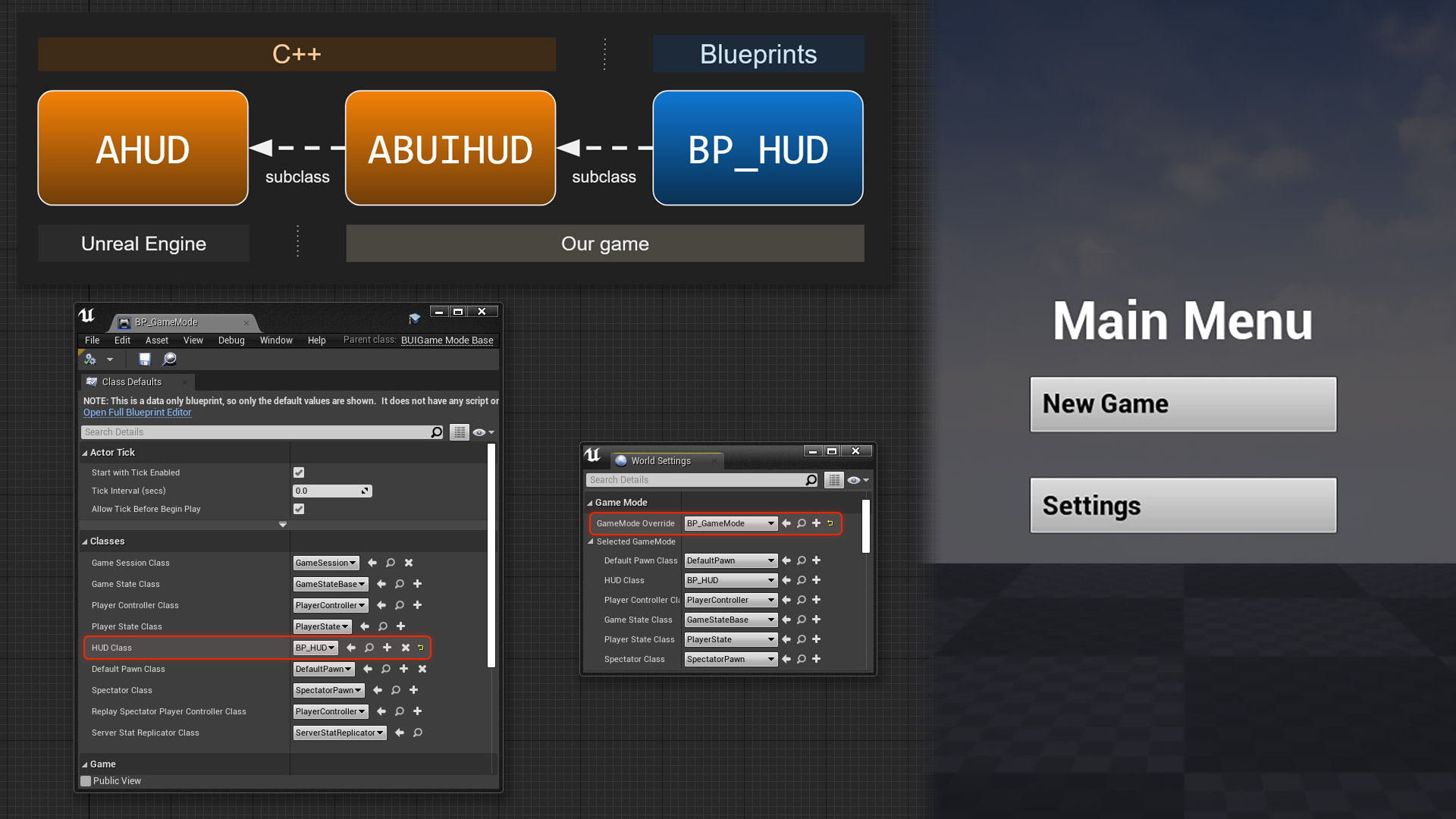 It's tough to know where to start when setting up the UI for your game. There are a lot of existing Unreal classes that are suitable for housing your UI-related code. I'll describe what has worked for me so far.

A lot of Unreal setup boils down to subclassing existing classes to specify custom behaviour. In this case we will need to subclass AGameModeBase and AHUD in order to set up our custom UI manager.

If you haven't done it already, create a C++ or Blueprint subclass of AGameModeBase. We will need to use this to specify which HUD class is used in our levels. It's useful in general for choosing custom subclasses of APlayerController, AGameState and other core classes.

I recommend creating a C++ base class, and then a Blueprint subclass of that. I prefer to write logic in the C++ class so debugging and breakpoints are all available from C++ and then use Blueprint-exposed properties to connect things together and set gameplay variable values.

For this example we will be using the naming conventions described in UI Best Practices.

The default generated C++ is fine for what we need. We will be specifying our custom AHUD subclass in the blueprint.

As a side-note there is also a built-in Unreal class named AGameMode, but I would recommend using AGameModeBase. AGameMode is somewhat of a relic Unreal Engine's past as an engine that focused on match-based shooters, and comes with a lot of built-in functionality that is not always useful.

In the same way we created a subclass of AGameModeBase, now we will create a C++ subclass of AHUD. AHUD is a class that is created by and owned by APlayerController. For our purposes it will do fine.

The default BUIHUD.h and BUIHUD.cpp are OK, we will be adding functionality to it after we have hooked them up in Unreal.

Now that we have created C++ classes ABUIGameModeBase and ABUIHUD, we can re-start Unreal and create our Blueprint subclasses.

Right-click in the Content Browser, and choose Blueprint Class from the pop-up menu. See the diagram below

With both Blueprints created, we can now set BP_GameMode to use BP_HUD as its HUD class.

In order for our custom BP_GameMode Blueprint to be used, we must set it in the World Settings for our level. This window can be opened with:

Then choose BP_GameMode from the GameMode Override dropdown.

Phew, that was a lot of set-up, but thankfully we only have to do it once. Adding functionality from now on will be much easier.

We can now use our ABUIHUD class as the manager for our UI.

Let's add an example function that creates a MainMenu widget when a function is called.

If we create a test main menu UUserWidget Blueprint, and set the MainMenuClass property in BP_HUD, we can spawn it when the ShowMainMenu() function is called.

From C++ showing the main menu would look like this:

From Blueprints showing the main menu would look like this:

Look, we have a menu, managed in a AHUD subclass, and created via C++!