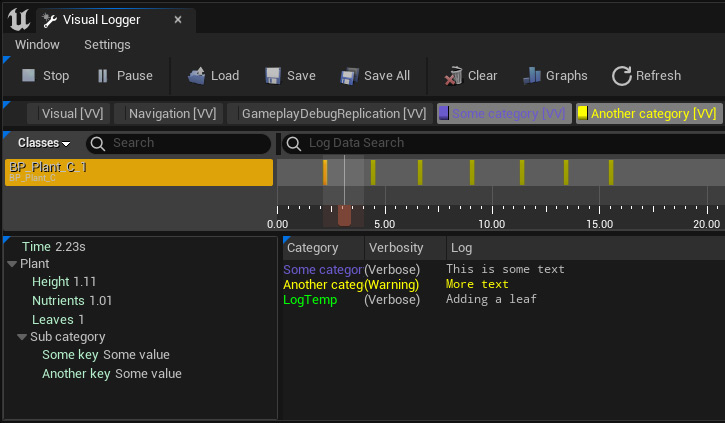 When using Unreal Engine, there are many different ways to help you understand what is going on in your game. To name a few:

Today we will cover the Visual Logger.

So what can the Visual Logger do?

Now let's compare it to other debugging related tools in Unreal:

So we can see that the Visual Logger lives up to its name: it is great for creating a visual and spatial log of what happened during gameplay. It's perfect for debugging things that have a spatial element; movement, collisions, projectiles.

To open the Visual Logger window:

At any point, before starting your game or during, click Start to begin recording. You may want to change Unreal's settings so that the log is cleared every time you press Play, in that case select Editor Preferences > Advanced - Visual Logger > Reset Data with New Session. With this you do not have to start and stop the Visual Logger every time you start or end a Play In Editor session.

The documentation for the Visual Logger is great for getting started, I thoroughly recommend reading it and then coming back here for advanced usage and tips on usage.

We provide this snapshot by implementing the IVisualLoggerDebugSnapshotInterface interface, which consists of a single function void GrabDebugSnapshot(FVisualLogEntry* Snapshot) const.

The snapshot information is shown in the bottom-left of the Visual Logger. It's a hierarchy of nested categories and strings.

It is also possible to set up visual logger shapes from within this GrabDebugSnapshot function, as well as by using UE_VLOG.

I think it's best to put these shape calls inside GrabDebugSnapshot if it's some information that you always want to know about the actor.

It's possible to create sub categories but they are auto-closed whenever you select a new entry so it kind of sucks from a usability standpoint.

Implementing IVisualLoggerDebugSnapshotInterface on Actors causes them to automatically show up in the Visual Logger, but the same is not true for components. However I still like to implement the interface in components and then call them in this way from the actor:

Then from within the component's GrabDebugSnapshot function, I can create new categories or add information to the last-added category:

Text log entries are shown as piece of text associated with a single-frame. I would use them for making it clear when events happen if they are related to spatial logging. For example when a character hits zero HP and starts their death animation. Use UE_VLOG_UELOG to also write to the regular log.

The main purpose of the visual logger is to draw 3D shapes in the world, so it has support for a bunch of different shapes.

The Visual Logger also has the concept of Events. They appear much as text does, as a single-frame entry. I can't really tell how they are treated differently to text, but they are used in a few places within the Unreal codebase.

The visual logger can also display two-dimensional charts that they call histograms. They are displayed in full-screen and seem to be useful for showing 2D data that changes over time. The graph seems to scale itself to fit all the data for that frame. I can't think of any particularly common use-cases

Interestingly the Gameplay Abilities System has a call to it for visualizing attributes changing over time.

From what I've heard from people at Epic the future of the Visual Logger is a little in question, but I've found it incredibly useful for debugging collisions, movement and AI.

For a point of comparison, the Gameplay Debugger is under more active development and is more suited for multiplayer and realtime interactive debugging.