Data Tables, Data Assets and others 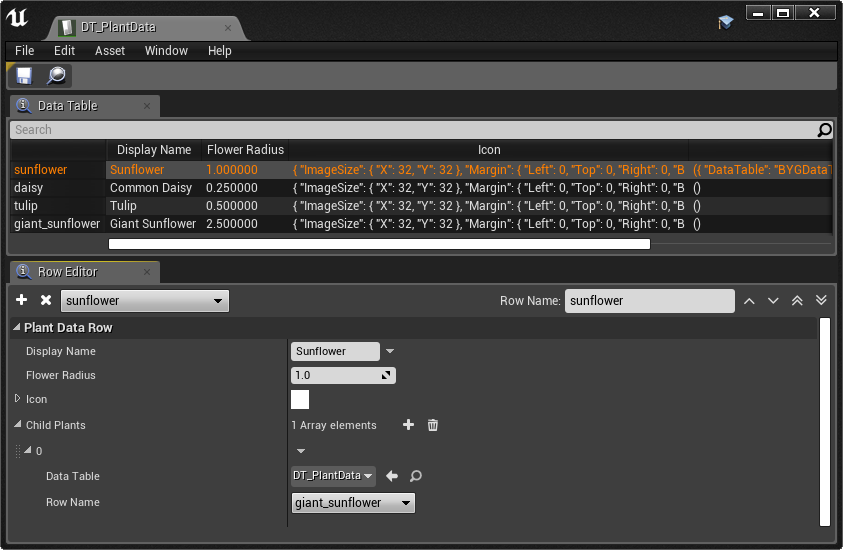 What is data-driven game design

Through data-driven game design, programmers can empower designers and artists to create and iterate on games.

Rather than programmers writing custom logic for every part of the game, with hardcoded values, classes and behaviours, programmers instead create a suite of behaviours and tools that designers and artists can experiment with to create the best possible game.

Imagine we are making a village management game where the player can create buildings and have their little villagers run around, farming, mining and constructing.

We would expose to designers all of the variables we might associate with such a game:

However as a programmer you might decide to write all of the logic for each of the buildings in their own classes. Farm.cpp, Windmill.cpp, House.cpp etc. Maybe you use inheritance to share common code, and seems pretty simple.

But what if a designer wants to create a new type of building? They have to come to you, the programmer and ask you to create it. Being a programmer is about being intelligently lazy, so how can we improve this?

Stepping back, what is a building? What can it do? We can see a building as a set of behaviours that can be mixed and matched:

Programmers are only required to create new behaviours. For example designers might want buildings to be able to catch fire. In that case then the programmer can create this new behaviour and let designers add it to the buildings they want to be flammable.

Update: In May 2022, I hosted a roundtable discussion on data formats in Unreal. Check it out for a details about the strengths and weaknesses of different approaches to storing game data in Unreal.

Data-driven design concepts aside, what tools are available to us in Unreal?

After a bunch of investigating, none of these are ideal, They all have significant weaknesses that I will discuss.

Data Tables UDataTable are designed for large amounts of data and to be compatible with import/export from JSON and CSV, however they have some significant drawbacks too.

Your data structure must inherit from FTableRowBase and must be a struct. To reference other Data Table rows, use FDataTableRowHandle.

Curve Tables are similar to Data Tables but are suited to defining two-dimensional data like the way a character's health might change as it levels up.

Update: I previously had a point saying that "Referencing Data Table rows is not type-safe.". As of Unreal 5.0 this is no longer the case. There is a meta property that lets you specify the row type to use for a FDataTableRowHandle

Create a C++ subclass of UDataAsset. Then in the editor create an Asset Instance of this through right-click > Miscellaneous > Data Asset.

Note: There is a significant difference between creating a Blueprint Subclass of UDataAsset and creating an Asset Instance of a UDataAsset class. Most likely you want to create instances of your defined UDataAsset subclass. Make sure to create them through right-click > Miscellaneous > Data Asset. Creating Blueprint subclasses of your UDataAsset is not the same thing. It is for creating new classes to add new properties.

Alternatively you could just ignore the Unreal editor interface entirely and keep and edit all your data in plain text, in a format of your choosing.

This has its own set of problems, regardless of what text format you choose.

The ideal tool would:

None of the tools offered by Unreal fulfill this list.

So choose whichever is the least-bad for you.

Or just use Unity and Odin Inspector.